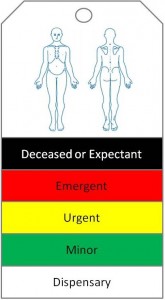 The objective of this project is to determine the validity and inter-rater reliability of a standardized triage and acuity scale for use at mass gathering events.  It is well know that MGM events are becoming increasingly popular in our local communities.  Mass gatherings are generally safe but sometimes a mass casualty incident (MCI) will occur as seen in the summer of 2011 where four festivals (Blues Festival – Ottawa, Pukkelpop – Belgium, State Fair – Indiana, & District Block Party – Oklahoma) saw their outdoor, temporary stage structures collapse resulting in injuries and deaths to spectators, performers, and event staff.  These MCI have the potential to overwhelm the medical resources requiring the use of a triaging system.

Having a common triaging system designed for mass gathering and mass participation events is important so healthcare providers can categorize similar patient presentations which can be studied at a later date for common trends.  Currently, the literature reports injuries as minor, major, serious, and other vague terms.  To further add to the current challenge of studying MGM events, terms such as minor and major mean different thing to different levels of care providers.  A fractured leg with a deep laceration may be a major injury for a basic level first aider and categorized as such, where an orthopedic surgeon may treat it as something more routine or minor.

Categorizing injuries presented as a challenge during roll-out of our online Event and Patient Registry which resulted in this registry ‘sub-study’.

We have adapted a familiar, 4 color triaging system, Simple Triage and Rapid Transport (START), because it is simple to use and most widely used during disaster triaging.  As we trialed this scaling system for use in our Registry Project, we noticed an exceptionally high number of Green/Minor category patients.  Patients who required a band-aid for injury prevention, a Tylenol for their headache, or even a quiet place to sit in hopes of preventing an anxiety attack, did not necessarily require medical intervention or assessment (the defining point between a Green and White category).  These treatments were often not documented as part of the regular charting process.  This non-documentation did not allow the medical teams to fully capture the services they provided during the event.  To address this we created a 5th category, the White/Dispensary category.  This category makes up the bulk of services provided during MGM events.

This study has 3 phases: